A luxury holiday to South Africa – with its game reserves, wine regions, beaches, buzzing cities and beautiful landscapes – bestows you with a lion’s share of unforgettable experiences during any trip. It’s simply impossible to experience it all in just one tour!

Africa’s southernmost country is known first and foremost for its safaris, celebrated as one of the best destinations for wildlife watching in the world. Many will have already heard about Greater Kruger National Park in western South Africa, and for good reason. This huge game reserve has been established for over a century now, home to thousands of species including the Big Five – elephant, leopard, lion, buffalo and rhino – with around 20,000sq km of land to roam through. There’s also Sabi Sands, Timbavati and Madikwe in this part of the country, while the Eastern Cape plays host to a clutch of malaria-free game reserves like Kwandwe and Shamwari that make it easy to explore with children. Luxury safari lodges in South Africa are also of an exceptional standard, offering not only fantastic game drives and bush walks but also exquisite design, service and dining too. Like the sound of elephant-watching while soaking in your private pool? Or sipping fine wine while enjoying a candlelit meal in the bush? Then you need look no further.

In fact, when it comes to wine, South Africa is also a world-class producer. Tasting tours are easily done from Cape Town, as the treasured Winelands region can be reached within just one hour from the city. Neat rows of flourishing vines are backed by dramatic mountain ranges, making for one of the world’s most scenic wine regions that just happens to produce award-winning varieties, including the acclaimed Pinotage. Longstanding wine estates, historic towns (such as Franschhoek, Stellenbosch and Paarl) plus that stunning backdrop ensure a South African wine-tasting holiday is unlike any other.

The Winelands are also a fantastic foodie destination, though South Africa boasts exquisite dining elsewhere too. Cape Town, for example, is renowned for its cuisine, brimming with high-end restaurants serving just-caught seafood in various elegant settings, many overlooking the ocean. In fact, Cape Town is well worth lingering for longer, thanks to its bustling V&A Waterfront, art galleries, Kirstenbosch botanic gardens, and hip hotels that take the whole experience up several notches. You can also watch penguins down at Boulders Beach nearby, take a tour up Table Mountain, or visit Robben Island where Nelson Mandela was held captive for 27 years.

On top of all this, luxury holidays in South Africa have even more to offer. Whale-watching from the cliffs at Hermanus, road trips through the Garden Route, horse riding between the mountains and sea at Grootbos, hiking through jaw-dropping scenery at KwaZulu Natal, or even cage diving with sharks in Gansbaai. To call South Africa ‘diverse’, really is an understatement!

One & Only Cape Town 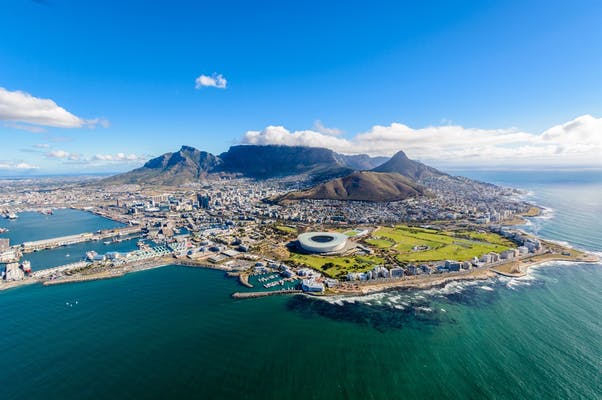